Black Moons & Full Moons, why do they matter for us night divers?

Lets go into some more detail regarding both types of Moons and how they affect our night dives and why you should join us on our next one.

Coral reefs are living organisms, they live, breathe and re-produce. It would seem though that instead of just spawning when-ever they feel like it, most corals use natural events to trigger their spawning and re-production cycles. Lunar events like a Full Moon are almost certainly one of these triggers, it is not clearly understood exactly what mechanisms the coral reefs use to detect the Full Moons, but it is thought to be the extra light that is reflected from the Moon back to Earth, new research suggests that, an ancient gene in the corals is specifically designed to detect Moonlight, so Full Moons can literally be felt by the Coral reefs of the world, it’s a bit like when us guys watch a movie with Megan Fox in it.

So that is the primary reason why Full Moon night diving is really interesting, it’s like one giant messy party where everyone who lives on the reservation gets very drunk and accidentally create the worlds largest street party, typically ending in an orgy of love and headaches. So why would I want to swim around in that you may be asking yourself? Well lets go deeper (excuse the pun), coral spawning is not just a chance for the corals to re-produce, which is awesome to see in itself, but the spawning is also a huge buffet dinner for a variety of rare and wonderful critters that you would not normally see.

I’m not going to tell you about the awesome creatures we see during our full moon dives when the corals are spawning, I’m just going to say you don’t see them at any other time. Full Moon night diving is a bucket list experience, it’s a bit like seeing lava for the first time, or the time you camped out in the middle of nowhere and truly saw what stars and our universe look like without all that light pollution.

If you are interested in seeing the awesomeness of the worlds largest living organism in its rarest form, then get in contact with us and sign up for the next Full Moon Night Dive here in Phuket.

You may not have heard the term Black Moon before, but we use it in diving to describe the ‘New Moon’ or if that still isn’t making any sense, when there is no visible Moon, the opposite of a Full Moon and when there is almost zero light being reflected back to Earth, the very darkest of nights. The darker we can get when we dive is actually a good thing, there are no Vampires in the ocean so there is very little to be afraid of and everything to be excited about, what are these exciting things though?

One of them is Bio-luminescence, we will talk about bio (short for bio-luminescence) in more detail in later posts. I will give you a brief description here though. Bio is one of the primary reasons we go night diving, or why people want to go night diving with us here in Phuket. Bio can best be described as natural lights in the water, there are quite a few types of it, but I’ll talk about the two main ones.

Firstly there is Scatter, it can be in different quantities every time you night dive but is almost always present. Scatter becomes visible to you when you turn off your torch and start waving your hands around in front of your face. Your hands trigger green neon sparks of lights, it is very hard to describe because there is absolutely nothing like it on Earth to compare it to. Imagine waving your hands around in front of you to create light while you are on a mission to the refrigerator for a late night snack, you are basically a wizard creating your own light sources to navigate by. Even cooler than that is the fact that sometimes there is so much scatter present, you can swim around with your torches off, following the person in front just by the light their fins create as they kick through the water as you dive!

Typically with good scatter a lot of us try to see just how much we can activate all at once, we frantically wave our hands around like the worlds greatest orchestra conductors, directing our own personal underwater light shows. It is a frightfully fun experience and thanks to the Andaman sea here in Phuket we are never ever left wanting for Scatter on our night dives!

Second on the list and a personal favorite of mine is something we nick-named ‘Blue Pearls’. Try to imagine this, you turn off your torches, after a brief moment you begin to see bright neon blue specs almost like little stars, appear in the water around you. Then you notice that each of these little stars has another one beneath it, and another beneath that all connected via a glowing bright blue silken thread. Blue Pearls look just like a string of blue glowing LED lights, sometimes 3, sometimes 4, sometimes 5 in a line hanging in the water.

When it happens, it really happens, no matter where you look you will see more and more, it’s similar to watching Fire Flies become visible as the sun sets, the more you look the more you see, it’s absolutely mind blowing. It gets even better than that, because as swim through this bio with your torches off, you will think you are floating in space zipping past the stars like some kind of formless space god. You might reach out to touch one, only to find it impossible to tell exactly where it is, you are truly just an observer in the great cosmic display around you.

I could talk about blue pearls all night long, and will do in a later post, for now it suffices to say that the more you night dive the greater your chances of experiencing this become. So get in contact with us and book in a night dive, let us show you the wonderful nighttime world below the waves.

Alright that should have cleared up any confusion or questions as to why we dive Full and Black Moons, each has it’s own personal special features, hence why we call them special night dives!

This entry was posted in Night Diving Facts on April 2, 2014 by simon. 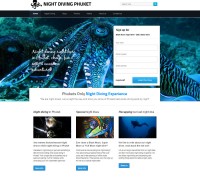